We help couples relive and share the most important day of their lives.

Your wedding day will go by in the blink of an eye. Most couples experience it as a blissful blur, barely remembering those emotional moments that made it so special. Like a father’s tearful speech. Or heartfelt vows. Close family and friends won’t be with us forever. And when they’re gone, those wedding memories become priceless.

At Dream Day Films, our relentless focus is on making sure you have a beautiful film so you can relive your wedding day, share it proudly with friends and family, and capture enduring memories you will cherish forever.

He was able to perfectly capture not only our special day but our personalities, story and family. He covered every detail and exceeded our expectations. I would highly recommend Dream Day Films for your wedding video needs, you will not be disappointed!
*****
Caitlin
Bride
I can’t even begin to thank Robert and his assistant for capturing our wedding day just perfect! The day we received our films, we watched them over and over! It is everything we could have ever imagined! I highly recommend Dream Day Films to capture your wedding day!
Paige
Bride
Robert was great to work with throughout. He captured candid moments and we barely noticed him during the times that you don’t want to notice your videographer. However, he was present the whole time and put together a beautiful video for us.
*****
Curtis
Groom

The wedding video mistake that led to the beginning of Dream Day Films.

I’ll never forget the time I was at my cousin Lori’s wedding reception. It was a beautiful summer evening, high up on Grouse Mountain, overlooking Vancouver BC. Such an amazing spot, with the lights of the city twinkling below and ships swinging at anchor in English Bay. I had no idea this moment would lead to the creation of Dream Day Films.

People I hadn’t seen in years were there. It was a fun and emotional time, and we all shared a lot of laughs. During the speeches, I looked to the back of the room and saw a video camera set up, pointing at the podium. It was mounted on a tripod next to a table filled with some of Lori’s friends. This interested me, since I’d been shooting video since I was in junior high and had an interest in filmmaking. There was nobody standing behind the camera, but I just thought it had must been on continuous record. Surely if there is anyone you can depend on to make sure everything is being recorded, it’s your friends!

Sadly, I was wrong. 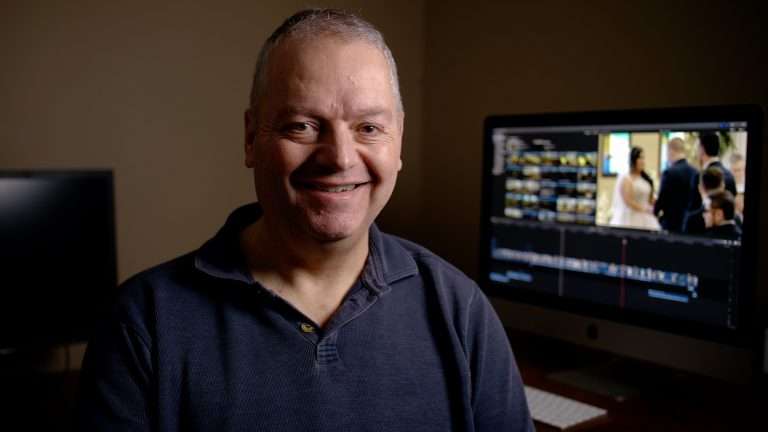 A native of Calgary, Robert founded Dream Day Films in 2001. Since that time he has led a team that has filmed over 300 weddings.

The next day at the gift opening, Lori looked angry. I asked her what was wrong. Turns out her friends hadn’t recorded anything. When she asked why, they answered that they had been having a good time and were “into the wedding.” And with that, all those memories were gone forever. Lori still had her photos from the day, but the loss of those amazing speeches and her first dance really upset her.

A few years later a friend asked me to film his wedding in Calgary. I thought about Lori’s experience and decided I had to do it right. I would approach it like a professional. This was before YouTube and online tutorials, so I bought a VHS tape on how to make a wedding video. The tape helped a lot. I asked my friend Allen to help, and we showed up at Scarboro United Church fully prepared. Nobody knew it was our first time filming a wedding. The video turned out quite well, and we were approached by a friend of the bride asking us to film her wedding too.

Surprisingly, what I discovered was that many videographers at the time hadn’t bothered to learn the basics. As a result, wedding videography had earned a well-deserved reputation for cheesiness and poor quality. Lots of tacky graphics, shaky camerawork, and very poor audio. They were also long. Very, very long. That’s fine for keeping a permanent documentation of the day, but it also meant that if you wanted to share your wedding video with friends and family you had to fast forward through the slow bits to get to the good part.

I knew there had to be a better way.

I was still working full-time, but started Dream Day Films (aka Dream Day Video Productions) and began filming a few weddings every summer. I was hooked. I loved hearing back from couples about how much they loved their videos. But while brides and grooms enjoyed experiencing their big day again, I knew full well that friends would likely roll their eyes at the idea. “Hey, wanna watch my wedding video?” too often was the cue to leave.

There were some videographers making highlight videos at the time, but they were just video set to music. No audio. No story.

I wanted to create a concise wedding video that couples could share with friends and family, but that felt like nothing was missing. More like something you’d see on TV or in a movie theatre.

And that’s when Dream Day Films really came into its own. We began making short-form documentary-style wedding videos, weaving together a narrative that included all the best moments from the day. Not just moving images set to music, but the most meaningful words from vows, interviews, and speeches.

From the beginning, interviews with the bride and groom have been an important part of our style. We’ve always felt that a wedding film should be like a kind of time capsule for future generations. And it should always be a reminder of the importance of marriage. Something that couples can watch when they’re going through the inevitable rocky patch to remind themselves why they fell in love.

Brides and grooms loved having a shorter, entertaining film. They usually still wanted their full ceremony and reception videos, but it was great to have a film they were proud to show friends and family in person or online. And, as it turned out, something they would watch every year on their anniversary.

Time has moved on. Video technology has improved dramatically since I first filmed a wedding back in 2001. Over the past 20 years our style has evolved, videographers on the team have come and gone, but the fundamental idea of what we offer to couples getting married remains the same. We want them to enjoy a stress-free wedding, not worrying about whether or not their friends remembered to hit record.