Ivy and Jay planned to have an intimate Lake Louise wedding. It’s a stunning location, and since it was the height of summer there were a lot of people visiting. Crowds around the chateau were so big that Parks Canada had put up signs routing foot traffic to avoid congestion. So how to have a private, intimate wedding in such a popular spot? 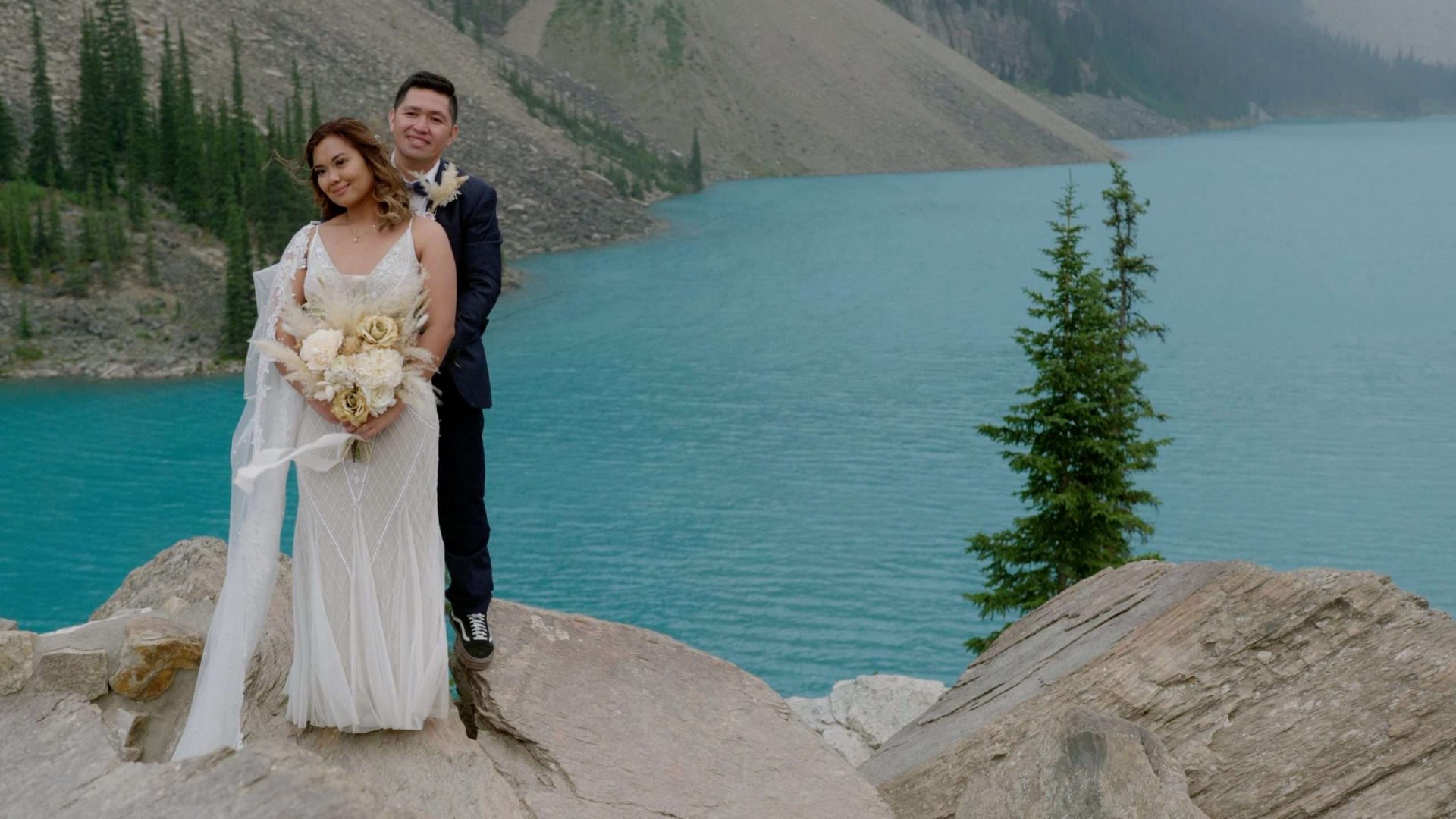 Getting Ready in Lake Louise Village

The day began for the happy couple and their families at the Lake Louise Inn. A little room juggling had to be done to keep them apart, as Ivy and Jay didn’t want to see each other before the ceremony. We spent about an hour at the Inn, filming each of them getting ready and Jay opening Ivy’s emotional gift.

From there it was up the winding road to the shores of the lake. As expected, there were a lot of people there and parking was at a premium. We met the officiant, Robin White, behind the Chateau Lake Louise and headed off to find a private location for the ceremony. The meadow is popular, but on this day there were a lot of people picnicking and sunbathing on it. Just as well, as the crowds walking the lakeside pathway would likely have stopped to watch and made for a distracting background.

We knew a great spot that was close by as we’d filmed a few other weddings there in the past. It’s a little further from the shore and higher up, but provides for stunning lake and mountain backdrops and a lot more privacy. People visiting are largely hidden. Exactly what you want for an intimate Lake Louise wedding!

The one thing we hadn’t anticipated was the frequent interruptions that took place, courtesy of a colony of resident ground squirrels, aka gophers. They stood and watched the ceremony, frequently commenting with their high-pitched squeaks. Ceremony over and the couple officially married, it was time for family photos then a quick trip up to Moraine Lake.

But this time the weather had taken a turn for the worse, with clouds rolling in and the threat of late afternoon showers. As it stands at a higher elevation than Lake Louise, Moraine Lake can be much cooler too. Fortunately, there was one benefit: reducing the size of crowds. Like Lake Louise, Moraine Lake has become very popular with park visitors. The number of vehicles allowed access is tightly controlled. This usually eases later in the day, and with light rain falling most visitors chose to leave.

We started out by climbing Moraine Lake’s famous rock pile which offers stunning views of the azure-coloured lake below. Then we got lucky. The rain petered out, the winds diminished, and we had the place pretty much to ourselves. Plus perfect light.

The End to a Perfect Day

After an hour or so, it was time to return to Lake Louise village. Ivy and Jay had dinner reservations and didn’t want to be late. They were both a lot of fun to spend the day with! We were about to head out for the return to Calgary when Ivy called. We’d forgotten to remove her hidden mic! Fortunately we were passing through the village and just had to make a quick side trip to retrieve it.

It was pretty clear that Ivy and Jay really love each other. He makes her laugh, and she stood by him through some very tough times. Their story and personalities really came through when they exchanged personal vows. All the best to Ivy and Jay in their future married life!

MusicMusic | “Fight and Fall” by Voyageur, Licensed through MusicBed 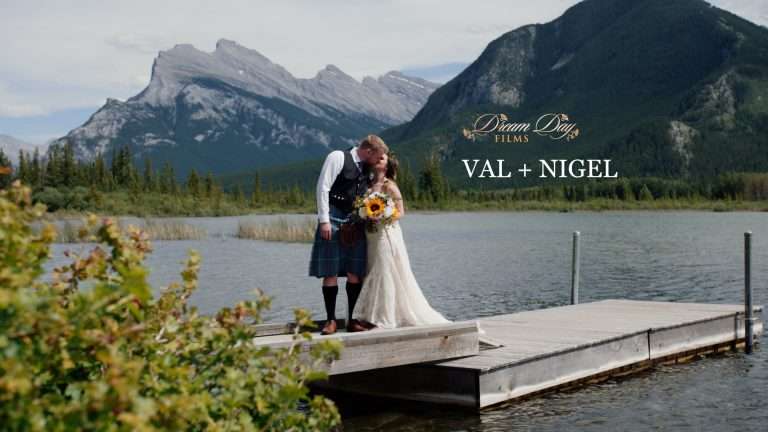 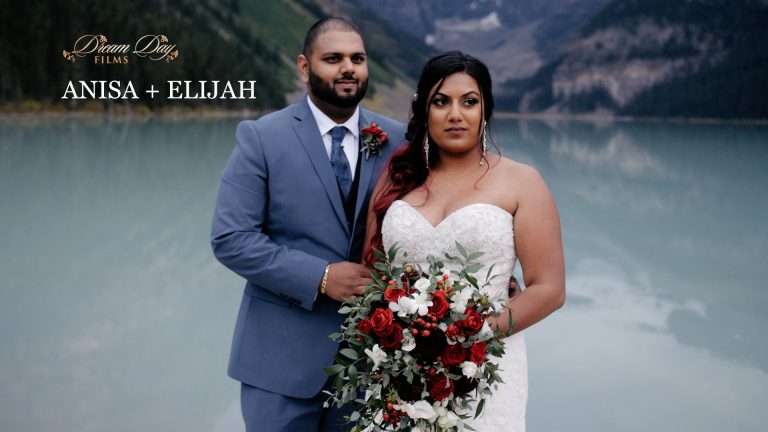 Crazy happy best describes this Toronto pair.  Anisa and Elijah share a love of travel and impromptu dancing. Life a little outside the expected. So when they… 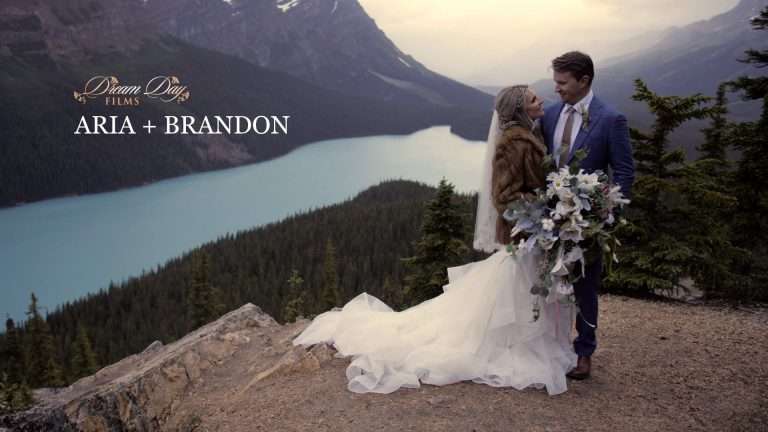 Aria and Brandon challenged themselves to find an intimate, adventurous location for their wedding. Searching online, they decided a Peyto Lake Elopement would be perfect…. 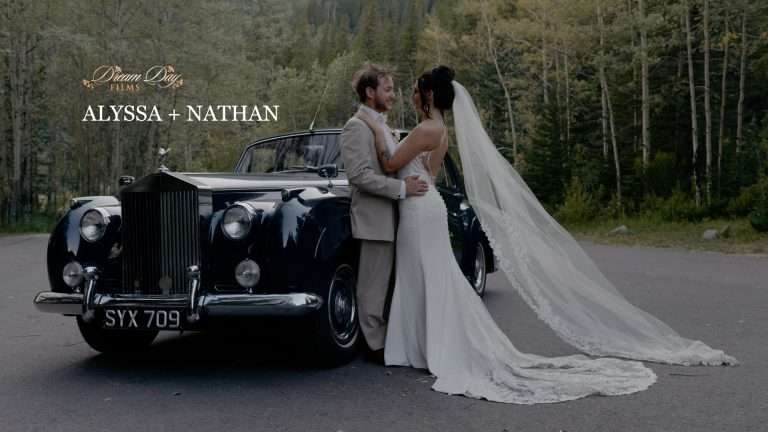 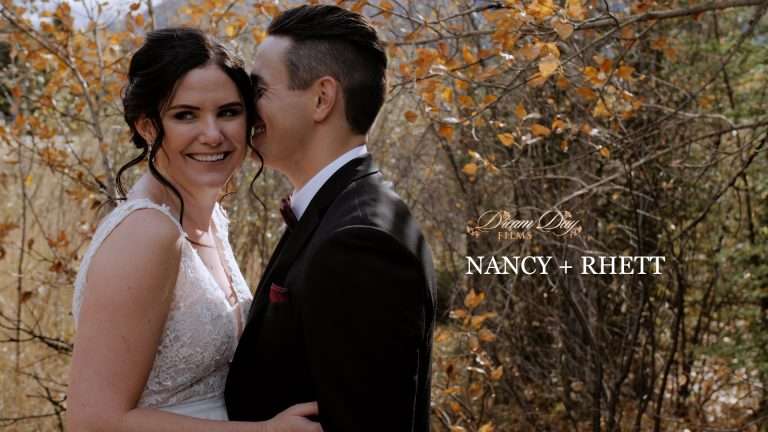 Sometimes changes to wedding plans forced by pandemic restrictions can work out for the best. Nancy and Rhett had planned a big wedding in Medicine…